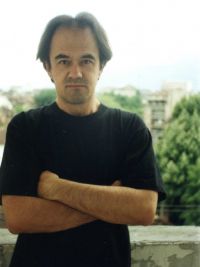 Plamen Antov is a literary theorist and historian, poet and writer. He was born in Mikhailovgrad/Montana (August 12, 1964). He graduated in Bulgarian Philology at Sofia University “St. Kliment Ohridski" (1990). Doctoral student at the Institute of Literature – BAS (2002–2005). Doctor of Philology – 2006 (PhD thesis: Bulgarian Postmodernism in the Traditions of Bulgarian Modernity. Context. Genesis. Specificity). Associate Professor – 2009. Doctor of Sciences – 2016 (DSc thesis: 1880s: Literature and Philosophy of History. Vazov. Author's Will and Memory of the Work). He is the author of about 200 scientific publications (studies, articles, reviews) and four monographs. Creator and leader of the scientific project Geopoetics: Literature and Geography. As a writer, he belongs to the literary generation of the 1990s; he was considered one of the representatives of Bulgarian postmodernism. He works in various fields and genres of fiction. He has published 13 books of poetry, stories, plays, fragments. He is a laureate of national awards for poetry and dramaturgy. His poems and scientific articles have been published abroad. Fellow of the Bulgarian Writеr’s Association and both academic associations the Bulgarian Society for Eighteenth-Century Studies and the Academic Circle of Comparative Literature (ACCL).