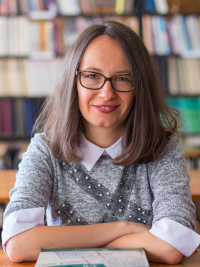 Andriana Spasova is a postdoctoral fellow at the National Program "Young Scientists and Postdoctoral Students" with her project "Reception and Digitalization of the Unexplored Manuscript Heritage of Nayden Gerov" (2019 - current). Her research interest is related to the tracing of the first receptions of classical antiquity and its samples in the cultural-historical situation of the Bulgarian 19th century. The object of her scientific observations are the translations of Aesop, Homer; critical reviews in the periodical press; the short narrative forms (fables, parables, anecdotes) in the first modern Bulgarian books and textbooks. Her current literary, historical and source studies are related to the reception of the unexplored manuscript heritage of Nayden Gerov. She is a laureate of various scholarly awards: first prize in the competition "Best Publication" in "Cultural and Historical Heritage and National Identity" in connection with the 150th anniversary of the Bulgarian Academy of Sciences (2019); winner of the competition for debut book of the publishing houses "ARS" and "Scribens" in the section "Humanities" (2018); Diploma for excellent research project "Reception of classical antiquity in moral translation literature during the Bulgarian Revival" in the "Program for the support of young scientists at BAS" (2017); first prize for criticism in the National Student Literary Competition, Shumen (2012). He is a member of the Academic Circle of Comparative Literature and of the Bulgarian Society for the Study of the 18th Century. Her debut collection of poems "The Sphere of the World" was published in 2016 (edited by A. Licheva) with the support of the Ministry of Culture.