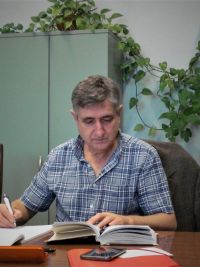 Radostin Rusev studies the Russian fiction of the 20th and 21st centuries (the Silver Age, "rural prose", modernism and postmodernism), the culture and literature of the Russian emigration in Bulgaria (in the 20s and 30s of the 20th century), Bulgarian-Russian literary dialogues in the 20th century. He is the author of the monograph With a Mask and Several Faces. Valentin Rasputin and Russian "Rural Prose" (60s - 80s of the 20th Century) (2000). His habilitation work is called Metaphors of Postmodernism in Russian Literature (2002). He is the Editor-in-Chief of the encyclopedic reference book Periodicals of the Russian Emigration in Bulgaria 1920 - 1943 (2012).