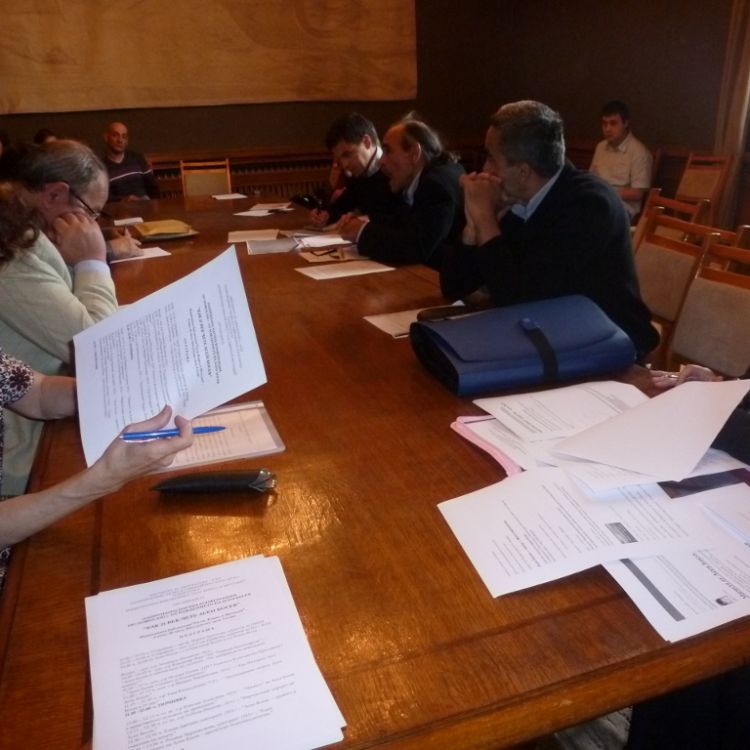 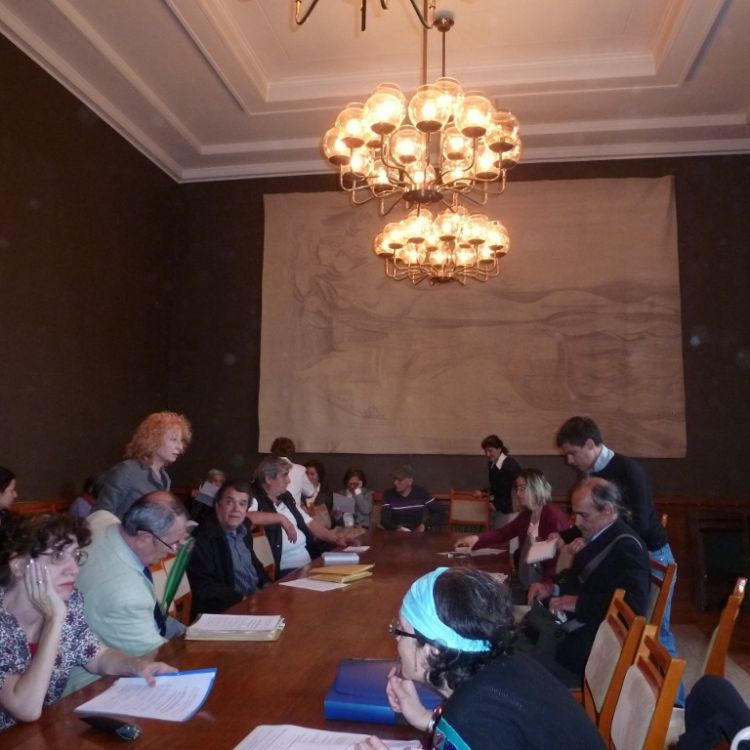 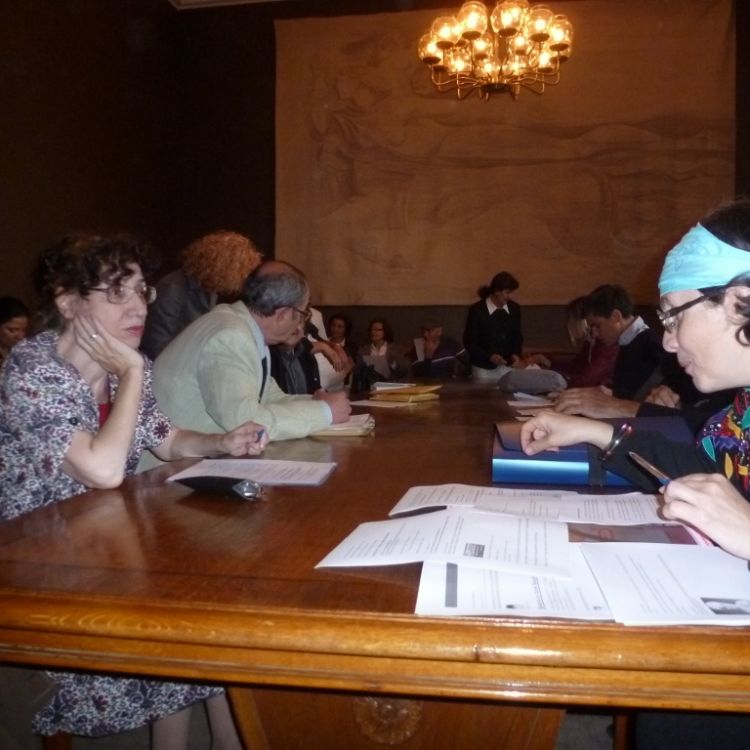 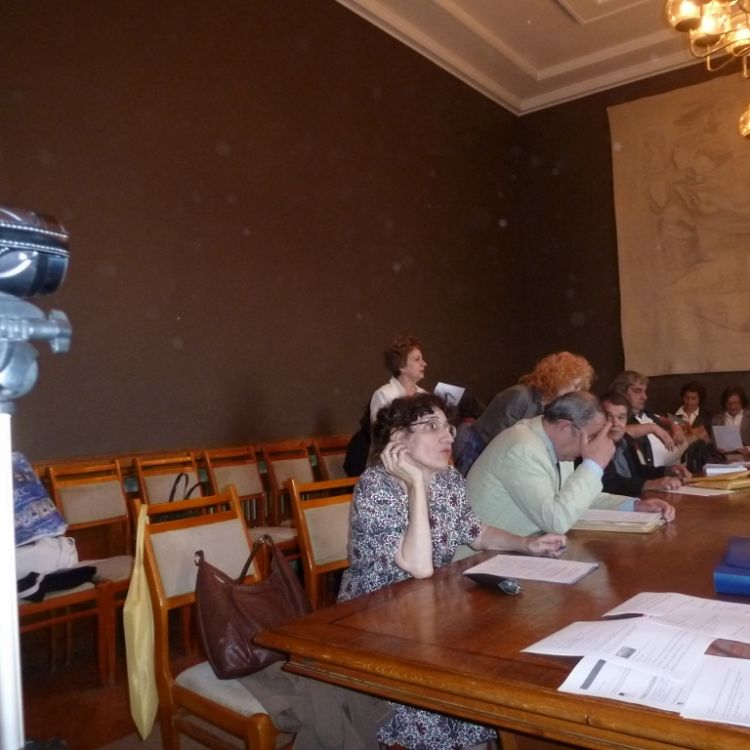 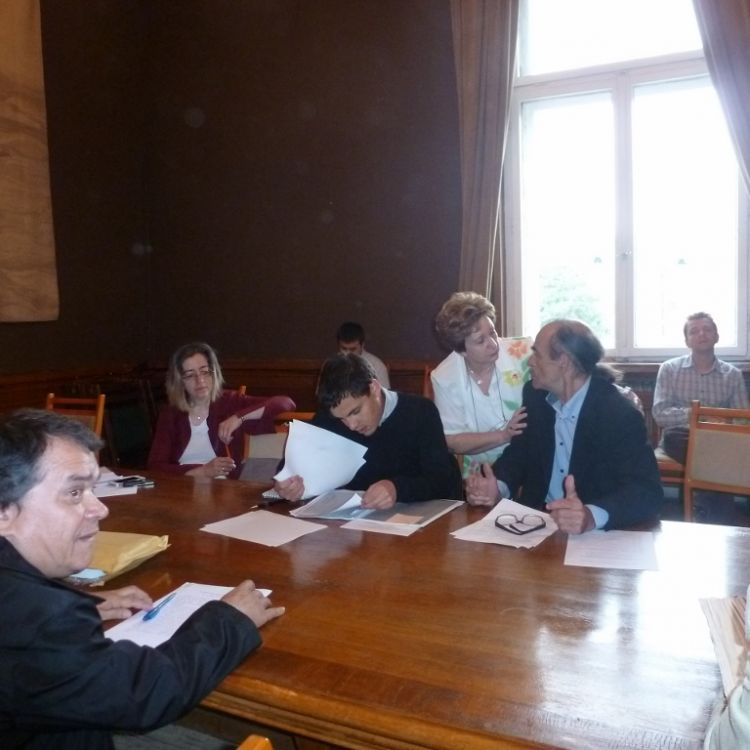 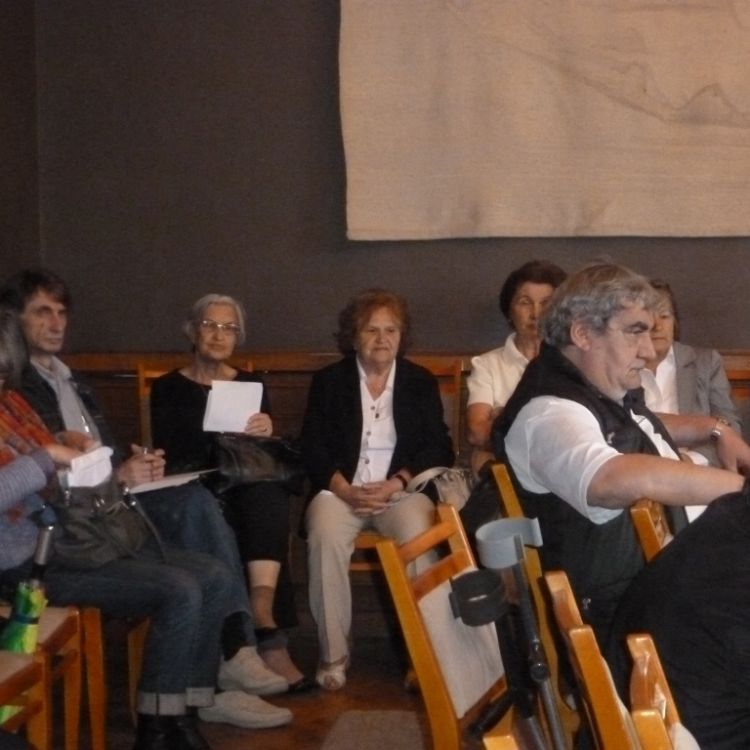 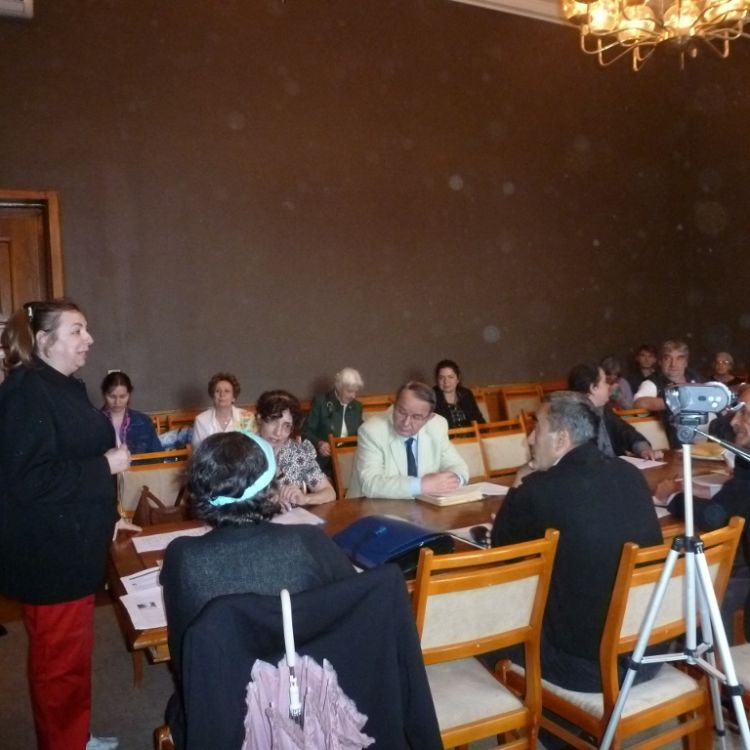 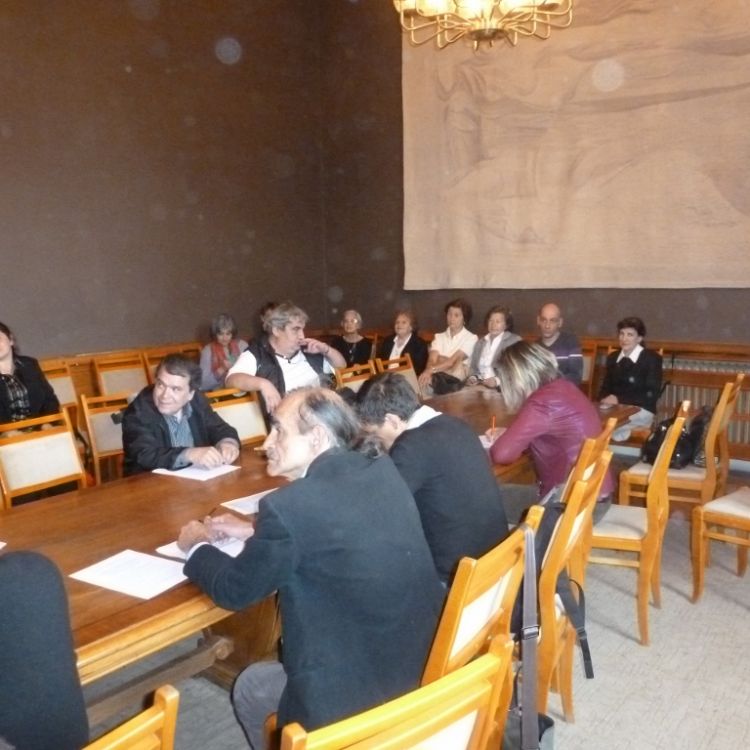 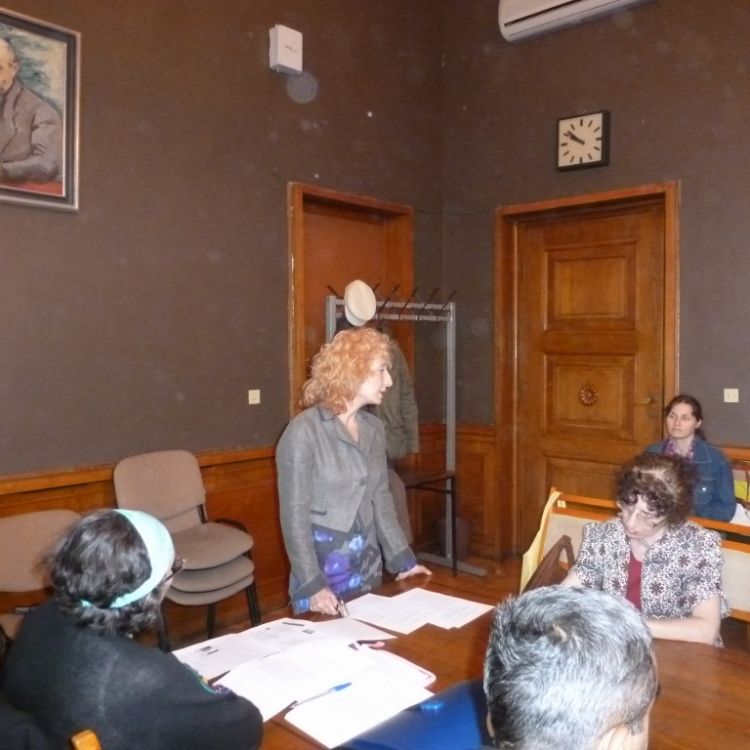 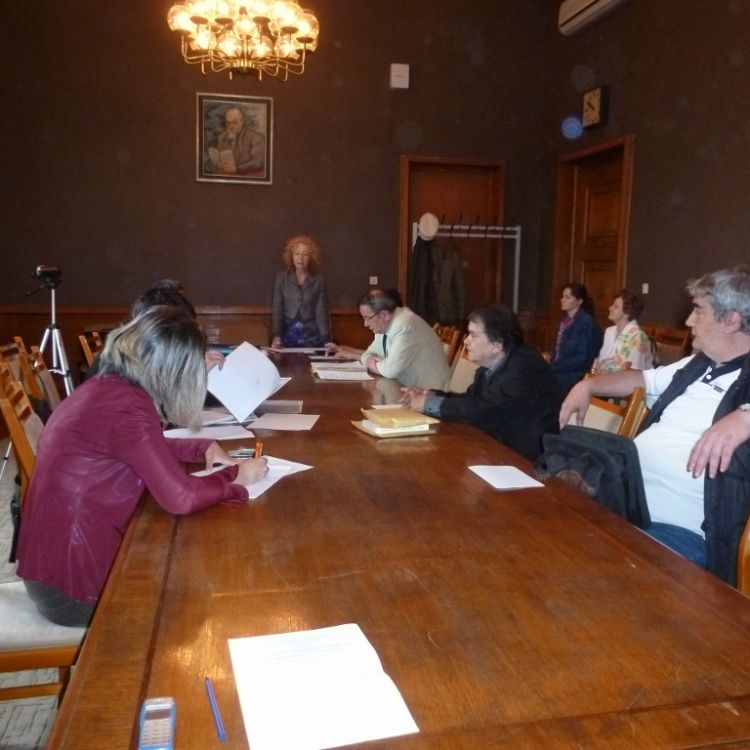 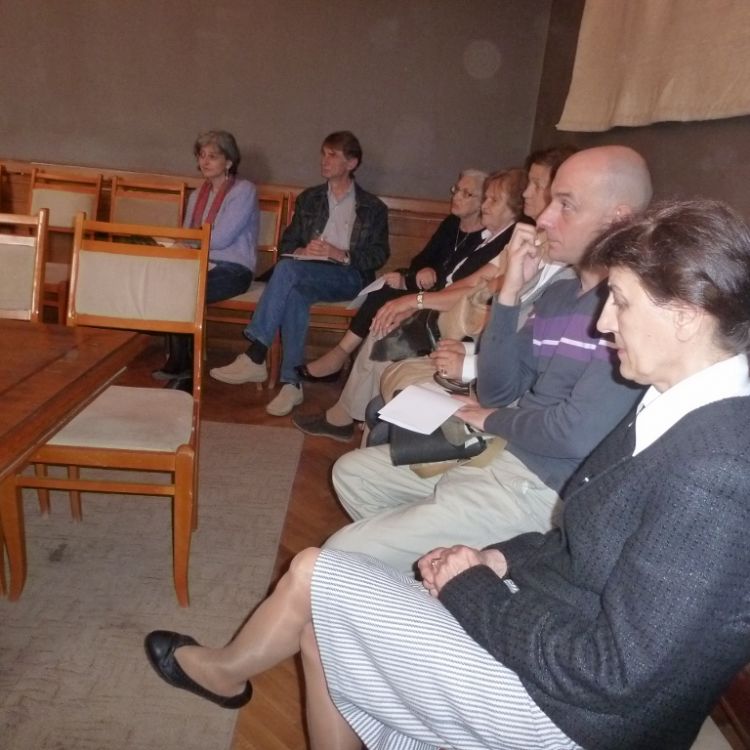 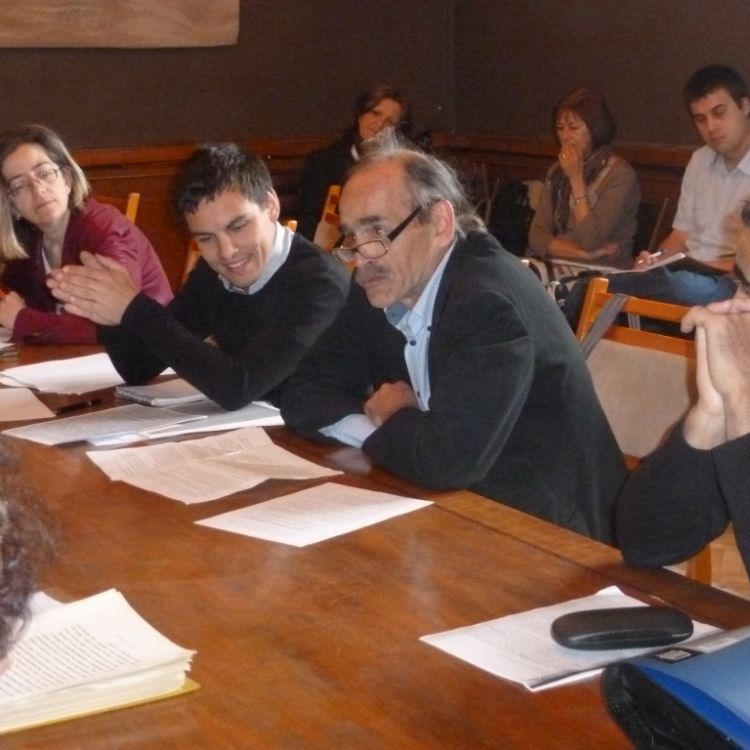 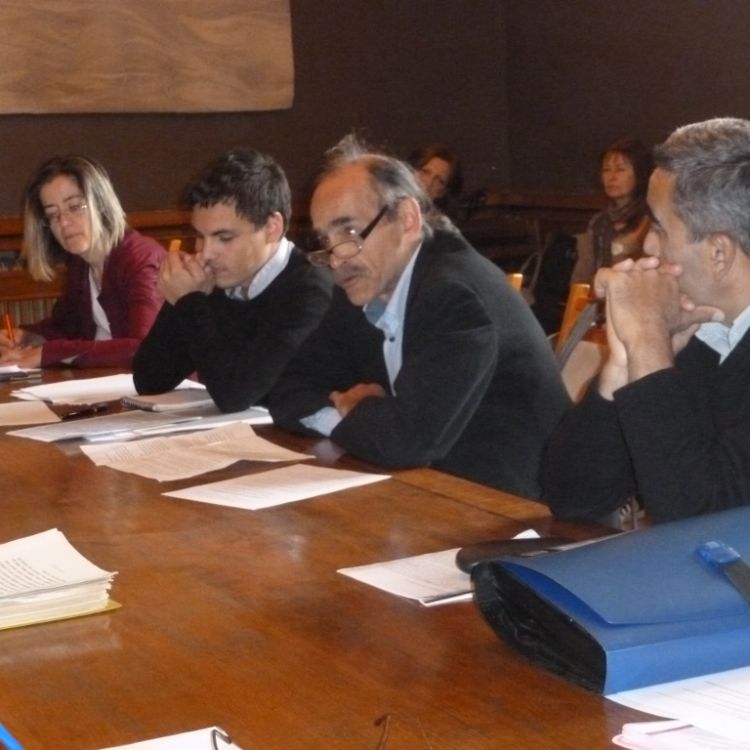 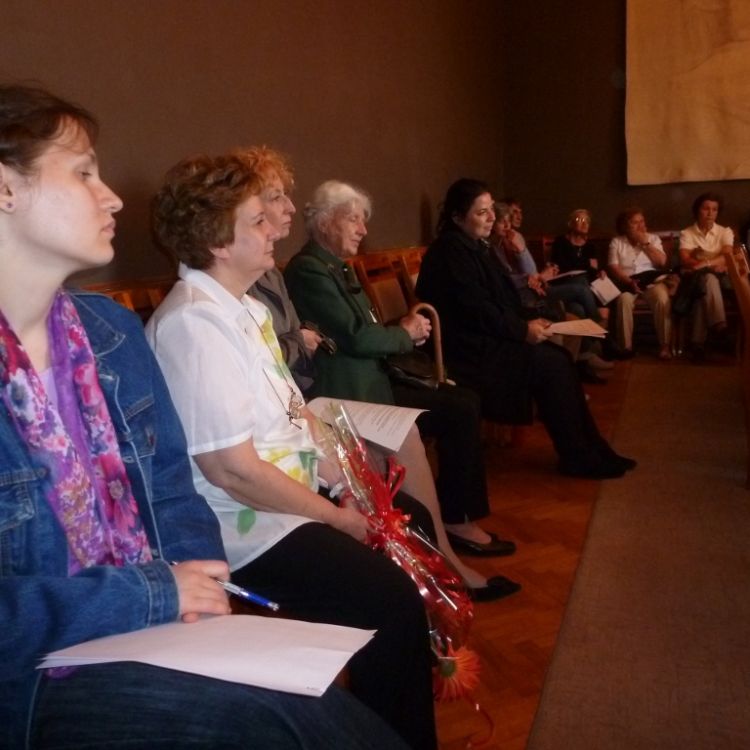 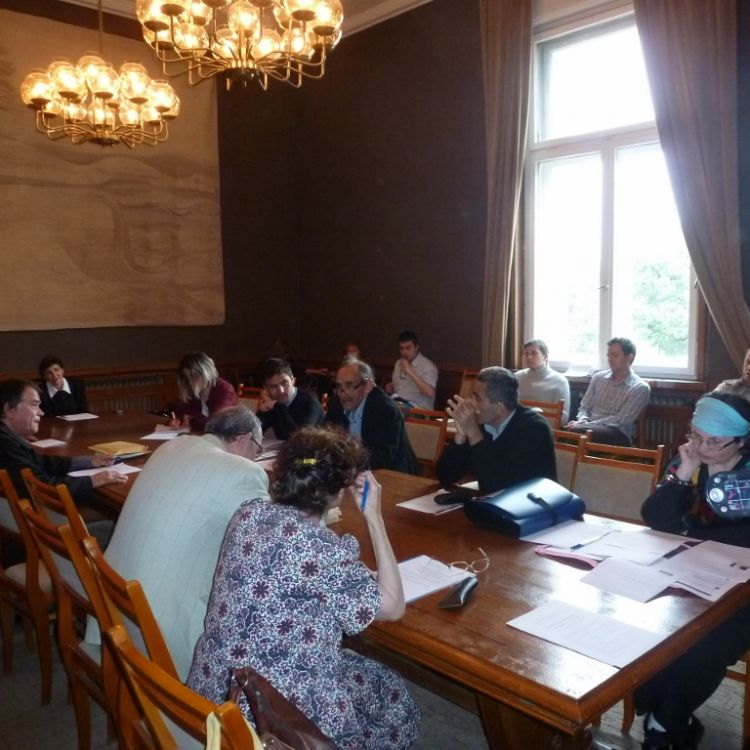 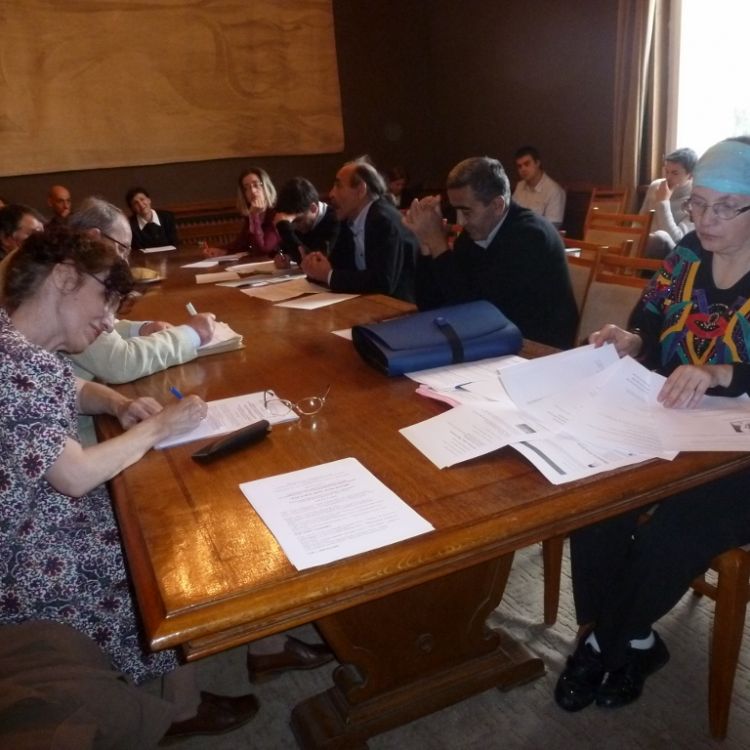 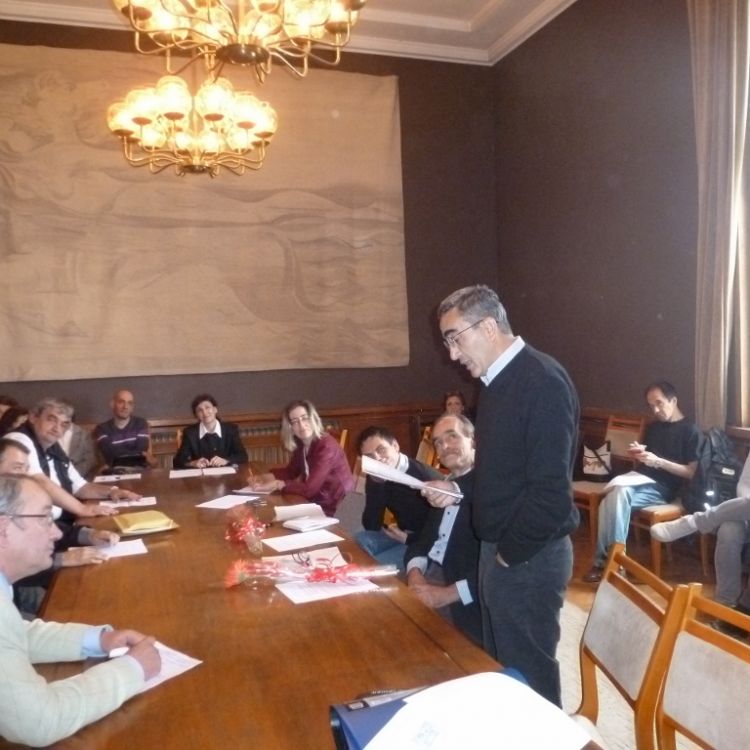 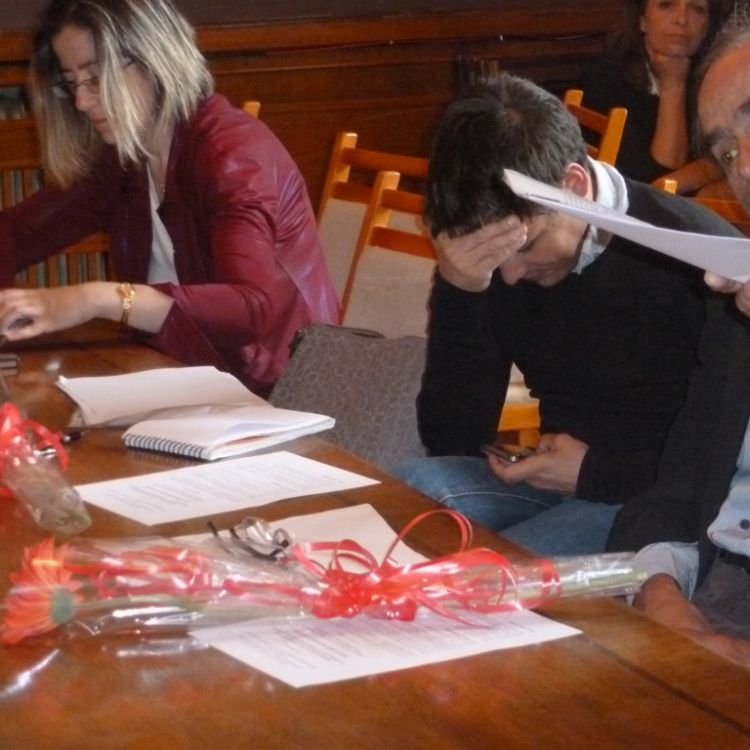 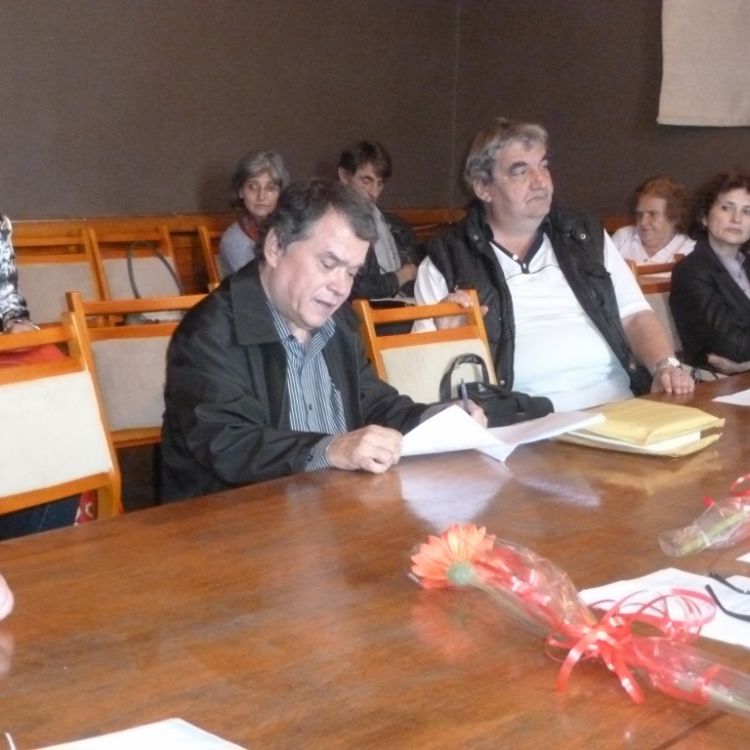 "The conference program shows how to read beyond the clichés and the project that Assos.Prof. Lyudmila Malinova and Dr. Rociza Chernokozheva develop in the Modern and Contemporary Bulgarian Literature Department indicates that children's literature has a place in our national literature", said Assos.Prof. Traykova. Assos.Prof. Lyudmila Malinova opened the first panel with welcome words to the participants in the forum and gave the word to the relatives of the writer - Mr. Krasimir Bosev and Mr. Rosen Bosev. Mr. Krasimir Bosev told memories about his father, about his notebooks in which he used to record his creative concepts, subsequently shaped on the typewriting machine. He told about his father’s rich correspondence with young readers, about his love of nature and his awards, the most dear of which was the Order of the Smile given with secret vote by the polish children. Mr. Rosev Bosev, grandson of the writer talked about the revelations he made in the State Archives - about the "shadow" hanging over his grandfather in the years before and after September 9th , for his grandfathers’ placement in a labor camp in 1941 and the case for operational monitoring initiated in 1952 on suspicion that he was a fascist agent provocateur. After this interesting and necessary for the contemporary literary studies biography facts Assos.Prof. Malinova gave the floor to Assos. Prof Dr. Vladimir Yanev (Plovdiv University “Paisii Hilendarski”), who in the report "Asen Bosev in his own memories. (Based on un unpublished inquiry)" told about an inquiry assigned years ago. He spoke about his travels and meetings with Asen Bosev, about Bosev’s precise memories of his family and his birthplace, the cities where he worked, the years of teaching, his publicist and journalistic appearances, about the writers he met in Sofia. Assos.Prof. Yanev highlighted the authentic stories Bosev told him about his relationship with the socialist groups, about his years at the labor camp in Enikyoy, about his participation in literary circles, about memories and correspondence with Sergey Mikhalkov and Gianni Rodari. The scientist focused on the original and extensive Assen Bosev’s reflections on the psychology of the creative process, he considered also the genre searches of the writer. In his report, "Assen Bosev. Reminiscence of twins" Assos. Prof. Dr. Michael Enchev (Shumen University "Episkop Konstantin Preslavski") examined the presence of writers like Assen Bosev bilaterally. In relationship with the socialists before September 9th Bosev believed the progressiveness and humaneness of the socialist ideal in the formation of a new man. Under these beliefs, he removed the child from his lyric image and put it in the community - as chavdarche, pionerche. "If the subject has a high standard in our literature, it is precisely Bosev who created it," said Assos.Prof. Enchev. The other "twin" in Assen Bosev’s works is the playfull one, the funy one. So Assos.Prof. Enchev named the other second line in the works of Bosev, one that has more artistic qualities, combined with the educational gaming. The scientist examined the literary achievements in Bosev’s tale, his inventions in the nonsense humor, Bosev’s multiple experiments with the genre of the riddle. In his report - "How the Internet reads Assen Bosev" Assos. Prof.Dr. Vihren Chernokozhev (Institute for Literature - BAS) recalled that in 1986 Bosev was nominated for the Hans Christian Andersen Award, also known as the Little Nobel Prize. While Bosev himself is an author and compiler of readers and books, his texts are not present in the current textbooks for primary school stage. The electronic catalog of the National Library shows that his last book was republished in 1996, and the last critical essay about him appeared 30 years ago. But the 21st century reads Assen Bosev on the Internet. Assos.Prof. Chernokozhev described Bosev’s presence in the cyberspace, quite different from the paper one - he noted the rich Bosev’s presence on the "Our childhood"site, where many of the writer’s books were scanned and their artistic value shined in the "feedback", possible with the interactive perception. Assos.Prof. Chernokozhev also analyzed Bosev’s expression methods and inventions regarding the development of the ridiculous cliché function, as also the skillful opposition "ridiculous-didactic." Assen Bosev’s presence in the global network was analyzed also by Dr. Tanya Kazandjieva (Sofia University "St. Kliment Ohridski"). In her report, "Two-dimensional artist. Assen Bosev in the 21st century - culturological reading" appeared the original thesis of moral criticism embedded in the conjunction Bosev’s images. "Assen Bosev makes an Aesopean parody of the society in which he lives, of its hypocrisy," said Kazandjieva. Among the techniques of parodying the scientist highlighted the method of mixing stories, the folklore nonsense. Dr. Kazandjieva stopped also on the mechanisms of humor in Bosev including dynamics, rhyme, rhythm, laconic expression. She described Bosev as a follower of Ran Bosilek and Elin Pelin humorous and educational traditions, stopped on the peculiarities of the satirical and the nonsense aesthetics of folk stylization as one of the many expressive techniques of Assen Bosev’s riddle, diverse in composition and style.

The second panel of the conference opened with a report by Chief Assistant Dr. Emilia Alexieva (Institute for Literature - BAS), which was focused on an emblematic Asen Bosev work – the “Mimeto” poem. The analysis proposed in the text "Mimeto" by Assen Bosev in the moral mirror of the tale” made a parallel between the artistic excellence of the work and the mechanisms of the tale. It actualized the story perception in a contemporary context of moral education - both childs’ and parents’. In the report "Virtual portrait of Assen Bosev" Chief Assist. Dr. Albena Ivanova (Institute for Literature - BAS) made a detailed analysis of the presence of Assen Bosev’s works on the Internet, noting both their massive scale in the global network and the continuing modern mothers’ interest in the works of the writer – the most true testament to his achievements. The purpose of Elena Davcheva (Institute for Literature - BAS, PhD) in the next report - "Asen Bosev - friend and adviser of the children" was to trace the presence of the artist in the educational books and the readers for the elementary educational stage - 1-4 class. She gave interesting statistics of Bossev’s works included in the educational materials for three consecutive periods: the period after September 9th, the period of the beginning of democratization of Bulgarian society to the beginning of the new century and since 2000 till today. "Since 2000, the name of Assen Bosev is not found in textbooks and readers," said lthe scientist. Davcheva focused on the quality of Bosev’s humorous works, on his skill to play in words, on his tales, which are original, because they are not just narrated, but retold in verse. "Even ideological works that present Bosev in educational materials as a representative of the generation of pioneering writers, show his concern for the universal values", said Davcheva. The last report of the conference offered an original psychoanalytic reading of Assen Bosev’s poem - "The Two Self of Athanas". In her text "A poem by Assen Bosev - read psychoanalytically" Rosica Chernokozheva (Institute for Literature - BAS, PhD) read the text as a psychodrama that depicted the struggle of the Super Self and It, according to the classical terminology of Sigmund Freud. Chernokozheva took one of the main ideas of Freudism which says that the Superego of the child is built according to the parents' Superego. "The poem depicts the rejection of the unhappy impulses that carry poor experience and expresses the natural pursuit of pleasure," said the scientist. "The child is a willing being", she recalled the words of the psychotherapist Francoise Dolto, continuing with the observations of her daughter on the prenatal phase of human development, when the play impulses are already visible. Chernokozheva considered child life as depicted on the principle of the pendulum, life between "want" and "need" and summed it as an actual evidence of the creative insights of a great interpreter of human heart.