In the first years after the establishment of the department, the study of literary history and literary criticism were strongly ideologized, subordinated to the dogmas of the class-party approach in literature. The leading research direction was the publication of literary archives, documents, academic editions of classics of Bulgarian literature. The most serious revolt against dogmatic criticism in the 1960s was carried out by the members of the deparment Toncho Zhechev, Krastyo Kuyumdzhiev, Zdravko Petrov as representatives of the so-called impressionist trend in criticism. They played an important role in affirming the free, essayistic form of the critical style, which to some extent broke down the limitations of socialist realism.

In the 70s the department was officially assigned to compile volumes three and four of History of Bulgarian Literature (1962 - 1976), as well as Essays on the History of Bulgarian Literature after 9.IX.1944 (1979 - 1980) in two volumes. The approach to literary history and modernity in these academic publications is subject to the ideological canons of socialist realism, which makes them historically unreliable and inaccurate.

At the end of this period, the department expanded the field of literary historical research with the series Periodicals and Literature and Literary Surveys. Created by Yordan Vassilev, Periodicals and Literature was conceived in 10 volumes as the first attempt at a comprehensive literary study of the Bulgarian literary periodical from the Liberation to the end of the Second World War (1878-1944). The published 5 volumes (1985 - 1999) made a significant contribution to the discovery and inclusion in scientific circulation of dozens of unknown or forgotten authors and works. So far, 40 books have been published in the biographical-documentary series Literary Surveys, conceived by Ivan Sarandev. They give meaning to the work of a number of contemporary Bulgarian writers through extremely rich psychobiographical and literary-historical material, which allows for interdisciplinary research in the field of psychology, sociology, social anthropology.

During the 80s and 90s of a number of important reviews and monographs were published: Time, Literature, Man. Observations on Contemporary Bulgarian Prose (1986) by Sabina Belyaeva; Yordan Yovkov. Life and Creative Path (1986) by Ivan Sarandev; The Bulgarian Story of Yesterday and Today (1987) and Imaginary and Real. The Fantastic in Bulgarian Fiction (1987) by Elka Konstantinova; The Ruthless Dreamer. Pages about Dimitar Podvarzachov (1986) by Vihren Chernokozhev; Atanas Dalchev (1988) by Svilen Karolev; Bulgarian Expressionism (1988) by Edvin Sugarev; Ivan Hadjiiski and Bulgarian Culture (1988) by Yordan Vassilev; History of Bulgarian Literature 1878 - 1944 (1990) by Svetlozar Igov; The Circle "Thought" (1991) by Tsvetanka Atanasova and others.

The end of the 20th century and the beginning of the 21st century mark a new stage in the historical knowledge of the new and contemporary Bulgarian literature and in the research activity of the department. The main priority now is to search for and analytically interpret current literary methodology of classical authors and works, but also of forgotten cultural figures and literary-historical facts, tracing the aesthetic and developmental trends in Bulgarian literature.

The Dictionary of New Bulgarian Literature (1994) contains bibliographic and analytical information about authors of Bulgarian literature from the Liberation to the 1990s, with an emphasis on poets, writers and critics whose work has been tendentiously interpreted, banned, and underestimated before 1989 due to ideological reasons. The series Critical Heritage of Bulgarian Modernism, Vols. 1 - 4  (2008 - 2011) collects authentic manifesto texts and critical interpretations on the aesthetic trends of modernism and the avant-garde.

In recent decades, the research of the department aims at preserving cultural memory as a sign of national identity, however, understood not as national self-sufficiency, but as a dialogue and comparison with other cultures. The department unites the humanitarian community in the country not only for participation in scientific conferences, but also for the creation of interdisciplinary research teams for the development of fundamental and applied international and national projects.

An important aspect of the work of the department is the organization of scholarly conferences on the occasion of anniversaries of Bulgarian writers, literary historians and critics or fundamental literary trends and cultural events. The scientific collections prepared as a result of the conferences, discussion, and round tables outline the place of the department in the field of contemporary literary studies: Pencho Slaveykov - 150 years since His Birth" (2017); Dimitar Talev - The Code of History and the Labyrinths of the Present in Literature" (2019); Yavorov - Literary and Biographical Plots (2009); Stoyan Mihajlovski, Pencho Slaveykov - Perspectives on the Modern (2009); The Dimitar Dimov Case - Literary Investigations (2003); Vaptsarov - Faith and Loneliness (2012); Once More I am Going Forwards by Myself... Proceedings of the National Conference "100 Years since the Birth of Yana Yazova (2013); Bulgarian and Modern. Vols. 1 and 2 (2014 - 2015); Dimcho Debelyanov. New Research (2009); Aleko Konstantinov. The Eternal Contemporary (2006) and others. Anniversary collections: Eternal Bulgarian Passions. Tribute to Toncho Zhechev (2004); With a Revival Spirit and a Modern Look. In Honor of Prof. Milena Tsaneva (2012); Spaces of Speech. In Honor of Prof. Svetlozar Igov, Vols. 1 and 2 (2012 - 2013); Bridges. In Honor of Yordan Vassilev (2005); The Modern Narrative. In Honor of Prof. Elka Konstantinova (2006); Classics and Avant-garde. In Honor of Prof. Ivan Sarandev (2006). These and a number of other thematic collections highlight the dimensions of our national cultural identity in the context of European modernity.

In the digital projects of the department, developed since the beginning of the 21st century, literary classics, contemporary poetry and prose have their intriguing virtual existence. In them, any curious reader could find little-known facts or completely unknown archival documents, read curious biographical and creative plots, get acquainted with current literary-critical interpretations. These are freely available digital products that achieve the complex synthesis between science and imagination, between knowledge and attractive visual forms, between literary-historical knowledge and practical application. Through them we show the long path of knowledge from the academic Institute to society. We provoke a wide range of users to comprehend the meaning and usefulness of this huge and highly professional work, to assess how important Bulgarian literature is not only in a national but also in a global context. 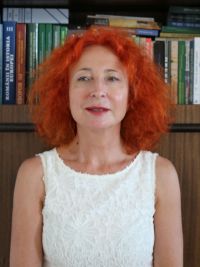